Foreigner: Pinoy Inability to Improve is due to Escapism 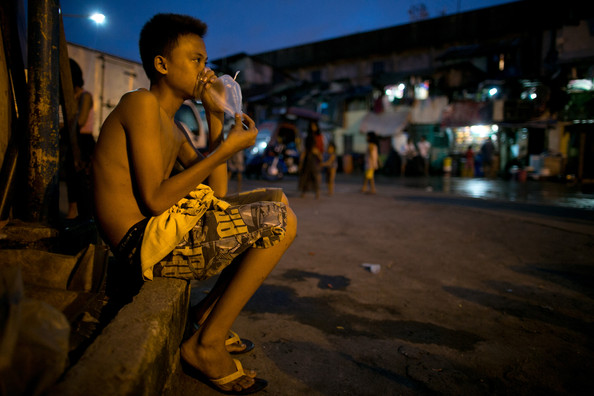 *This was taken from a status update of a foreigner. Names withheld and disguised to protect their privacy.

So, tonight after some grocery shopping, my personal assistant named Pilar asked me if I could stop by Cebuana for her so she could send money home for her brother’s wedding. This is to buy some Lechon as her contribution to the wedding.

After parking my car and paying the “Man with the whistle” (some random guy who has staked out a public parking area with a whistle, who demands you pay him 20 pesos to park or he will damage your car), running the gauntlet of baklas, hookers and lady boys on the corner, and then crossing the street whilst being accosted by beggars and street kids (mostly abandoned orphans working for syndicates), and having pushy street vendors try to sell me Chinese Viagra and cigarettes, along with their sisters, I started to think that there is something, very, very wrong with Philippine Culture.

If people have no money to get married, why are they getting married? If people have no money to support themselves, why have children they can’t afford to feed? If there are no jobs for so many people, why put up road blocks to foreign investment? Why block investment if it means better lives and opportunities for the citizens of this country? I cannot understand Filipino Nationalism when all it does is protect the ultra wealthy and promote this sort of tragic human theater of the absurd…. to take things to the extreme, today is “Ash Wednesday” and when you see hookers with the mark of the cross, written in ash on their foreheads, whilst selling their bodies on the streets…it says something about how far off the rails this place has gone. Most of these girls are single mothers, with a host of parasitic relatives feeding off their illicit toils.

The Government and its many bureaucratic arms are simply a huge tribe of inefficient trolls, finding ways to charge the poor downtrodden Filipino needless clearance “fees” for services they don’t need. When a religious procession for a black block of wood, wearing a dress, can drag hundreds of thousands of “devotees” into the streets in a frenzy of religious rapture, but a march organized to protest the theft of tens of Billions of Pesos by Congressmen and Senators can barely raise the interests of more than a few thousand, there is something very, very wrong with the priorities of the average Filipino. Has the Oligarchy, the Church and the Political Elite managed to make the Filipino so accepting of their lot in life that they simply cannot reason anymore, are they so used to the abnormal being normal that they have become completely apathetic and indifferent to the pathetic situation they find themselves in?

Like Martin Luther King Jr., I have a dream….but…since I’m not a Filipino…it doesn’t really matter what I dream of, or hope, for the Philippines. What matters is what the Filipino dreams about his/her own country, and what action he or she takes to fix the situation. The Civil Rights Movement in the US was a watershed event for that nation, as was the EDSA 1 “People Power” Revolution here. The oppressed rose up to say “enough is enough”, unfortunately, I don’t see that happening here again.

What I see is indifference, tolerance and acceptance by the oppressed, who, it would appear, are far more interested in watching telenovelas and Vice Ganda on “Showtime”, than marching in the streets to demand accountability. It seems the Philippines and the poor Filipino, is destined to spend eternity lurching from one crisis to the next, being led by one useless administration after another. What a tragedy… a horrible tragedy… and most of them are such nice people too…

This “indifference, tolerance, acceptance by the oppressed” (words of the foreigner) and by those who are in a position to change things is a result of the Filipino tendency towards Escapism. Like the kid in the photo (Source: Paula Bronstein/Getty Images AsiaPac) who is sniffing glue with nail polish in a plastic bag in order to forget his troubles, Filipinos are generally predisposed to “sweep problems under the rug” and pretend they do not exist. Underneath the positive stereotype that “Filipinos are a happy people” is the ugly and painful Truth that Filipinos are an Escapist People who pretend that their problems do not exist by distracting themselves with different things (sometimes combining two or more of them): religious fanaticism, entertainment, alcohol, or vices.

Even the Wealthy Elites who are supposed to be in a position to actually do something about the problem just prefer to retreat into their posh enclaves, pretending that the poverty, misery, and suffering around them is just a figment of their imagination. In some cases, there are sinister ones among these elites, the Kakistocratic selfish oligarchs, who want to keep the situation the way it is because they are at least happy to be at the top, fearing that reforms would cause them to lose whatever advantages they currently enjoy. This again reveals a dearth of analytical abilities among even the most educated and supposed advantaged Filipinos because they fail to see that the much needed reforms that would create inclusive growth are actually to their advantage in the bigger scheme of things.

The small mindedness of these oligarchs is such that they see only the short term “small picture” advantages they think they have as the 1987 Constitution and the laws of the Philippines continue to favor and protect them through all sorts of protectionist clauses designed to keep the Philippine Economy their own private turf and keep out honest and competent foreign direct investors who could have provided more jobs for ordinary people.

The oligarchs only see the small picture. They fail to see that the poverty around them is caused by the massive unemployment that these protectionist clauses spawned. They fail to see that this massive poverty actually poses a threat against the lavish lifestyles most of them enjoy. After all, despite the walls around their posh neighborhoods, do they really think that the poor squatters cannot breach those walls? Do they not realize that their maids, security guards, cooks, gardeners, and other workers come from the ranks of the poor? Do they not see that if the dire situation continues, they might actually lose it all?

Filipinos may seem to be a tolerant and indifferent people, but there are limits to this tolerance. Escapism can’t always keep their anger at bay. Like the Malays and Indonesians, Filipinos may be slow to anger, but when things get so bad, something can snap and the release of anger can and will lead people to “run amok” (aka “amuck”), a result of the Pinoy, Malay, and Indonesian tendency to want to “keep cool” and thus suppress whatever negativity they may feel. That they may not express such anger so easily and keep smiling on the outside doesn’t at all mean that the anger is not there or that the anger has dissipated. Not at all. The tendency towards anger has just been suppressed and placed in the deep recesses of their psyche, waiting and waiting and waiting until a certain limit is breached. There wouldn’t be a transition. It would simply be a sudden release of massive anger. And that’s when all hell breaks lose when one runs amok.

The walls that currently protect Forbes Park, Dasmariñas Village, and Bel Air, will never be high or strong enough to keep poor people who are running amok out. As mentioned, people from among the poor live and work among them inside their cute little enclaves as maids, drivers, gardners, etc. Where will their sympathies lie if their own relatives are among those who suffer the lousiness of massive unemployment that are ultimately caused by the inability of foreign direct investors to come in, create jobs, and ease the massive poverty that has forced more than 10 million Filipinos to find jobs abroad?

See, it’s not just the poor who are escapist… The Filipino Oligarchs are unrepentant escapists as well. They often pretend to themselves that they do not see the poverty and suffering around them. They desperately try to pretend that they live in the First World. They pretend that the 60/40 and other anti-FDI restrictions that they and those who came before them put up are serving them well. They forget to see that these restrictions simply widen the gulf between them and the extremely impoverished Filipinos whom they pretend are not people.

They also pretend not to see that FDI-induced inclusive growth, one which creates enough decent-paying jobs to allow the poor to rise up to become members of a new middle class and new rich in great numbers, is actually to their advantage. Filipino Oligarchs currently do enjoy a monopoly and an advantage. When the restrictions are removed and the foreign direct investors come in, don’t they realize that their companies are already well-positioned to be the suppliers that the MNCs and foreign direct investors will buy goods and services from when they start coming in and setting up?

Don’t these oligarchs see that when the foreign direct investors and MNCs start coming in en masse to build factories, it is the oligarch-owned construction companies who will be among the first to be contracted?

Don’t these oligarchs see that when the foreign direct investors and MNCs start coming in en masse and creating lots and lots of jobs for ordinary Filipinos, these Filipinos will now have incomes that will allow them to spend more on the products and services that oligarchs’ companies sell?

Don’t these oligarchs see that when the foreign direct investors and MNCs start coming in en masse and creating lots and lots of jobs for millions of poor Filipinos, these poor Filipinos will eventually cease to be poor, become new members of the middle class and nouveau riche and whatever resentment towards wealth and the oligarchs they once had will cease to exist?

Don’t these oligarchs see that when restrictions against FDI are removed and foreign direct investors and MNCs start coming in en masse and creating lots and lots of jobs for millions of poor Filipinos, crime will go down, security will improve, and the oligarchs will now be more able to enjoy living their lives the way rich and sophisticated people are supposed to live — able to freely dress up, ride fancy cars around town, and take leisurely strolls out in the open — without fearing for their lives or loss of property? (In places like Singapore, this is the case: the richest people can live the way rich people are supposed to live: driving fancy cars, taking leisurely strolls in public places without fear)

Escapism, narrow-mindedness, and short-term thinking aren’t limited only to the poor in the Philippines. At least in the Philippines, poor Filipinos have an excuse: they are way too focused on the short term to think of anything else.

For the Wealthy Filipino Oligarchs, what is their excuse for escapism, narrow-mindedness, and the kind of short-term thinking that is evidenced by many among them like Jose Ma. Montelibano, Winnie Monsod, Noynoy Aquino and others to keep fighting against Constitutional Reform and economic liberalization?

The Oligarchs have no excuse. Small-minded Selfishness can be overcome by simply taking a step back, looking at the bigger picture, and learning about what the fastest-growing economies of the world have done and are currently doing in order to promote inclusive job-creating economic growth that helps everyone: both the poor and the rich oligarchs alike.