The Venezuelan uprising that could change the future of Latin America 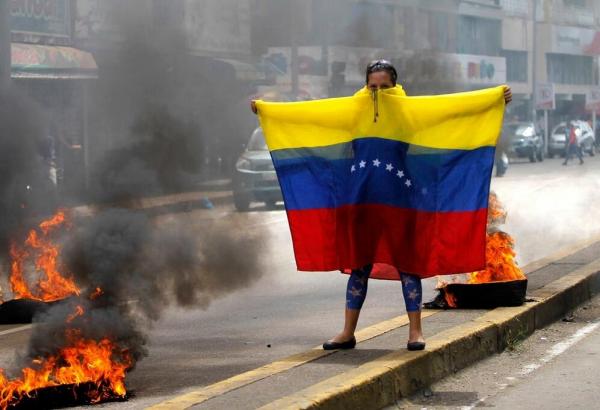 (Originally published in the EMBASSY – Canada’s Foreign Policy News Paper. We are putting this on our website as a public service as hordes of Maduro-supporting internet trolls have reported the original link and have prevented the original article from being shared on Facebook.)

With toilet paper, milk, cooking oil, corn flower and other essential goods in short supply, anti-government protesters have taken to the streets in Venezuela. (Photo by Nelson Dordelly-Rosales)

Less than a year since the death of Hugo Chávez was announced, his successor, Venezuelan President Nicolás Maduro, is struggling to maintain his grasp on power.

After he was declared to have narrowly won last year’s elections, protests erupted across the country requesting a manual recount of the votes. The shadows of fraud covered his legitimacy and generated questions regarding his abilities to manage the country.

Maduro continues the path of a Bolivarian Revolution that after 15 years, and even blessed with record-high oil prices, has been a failure; its results can only be described as catastrophic. Venezuela, the world’s fifth-largest oil producer, has one of the highest inflation rates in the region, more than 50 per cent, leaving Venezuelans unable to get basic goods. It also ranks among the world’s most violent countries according to a 2013 United Nations ranking.

When it comes to corruption, Venezuela is now near the bottom. For example, in 2013, Transparency International ranked Venezuela 160 out of 177 countries surveyed for corruption. These results demonstrate the failure of a “revolution.”

Maduro’s government, with the power to rule by decree, took extreme measures. The government limited businesses’ profit margins to 15 per cent to 30 per cent, with the threat of jail time for those who do not comply with the nationalization of their business. The government sent in the army to occupy appliance stores, forcing them to slash prices on electronics and other imported products. “Let nothing be left on the shelves” Maduro told Venezuelans at the time.

The new measures do not solve the main problems. Toilet paper, milk, cooking oil, corn flower and other essential goods are high commodities in a country with an economic potential that could supersede Brazil or Mexico.

Venezuelans had enough. Anti-government demonstrations began sweeping the nation. Mostly by college students who refuse that the only hope they have for a better future is to leave Venezuela. Peaceful protesters have been taking to the main cities, highways and streets to vent their frustration.

Maduro’s response was media censorship, a ban on public demonstrations and a violent crackdown on unarmed students in the last few days. The Maduro government’s use of Colectivos (the paramilitary wing of his political party) brings back terrible memories of the Sturmabteilung (Storm Troopers or Brownshirts) during the Nazi regime.

The killing of students in battle riots further fuelled the discontent that had already swept Venezuelans who on a daily basis have to deal with a collapsing economy, rampant crime and shortages of basic goods. Students keep a defiant posture against a government that seems to have lost its grip on power.

The collapse of the Bolivarian Revolution will produce a significant impact in the entire region. For example, Argentine President Cristina Kirchner’s policies have led to an economic crisis. Argentina’s peso lost 20 per cent at the beginning of this year. The nationalization of the country’s largest oil company has made Argentina become an energy importer, despite its huge reserves. And the policy of frozen utility rates led to power outages across the country. With the uprising of Venezuelan students, it is just a matter of time until citizens of other Latin American countries could join the stand against their populist governments.

Canada has a major role to play in the region. The efforts to expand the scope of opportunities for Canadian investments in Latin America must be accompanied by high standards for the respect of fundamental human rights, the rule of law and democratic rights in the region. The time has come for Canada to take a leadership role in Latin America and promote effective mechanisms for the protection of democratic values.

The Americas Strategy promised to make Latin America and the Caribbean a high priority for Canadian foreign policy. Canada has committed to playing a bigger role in the Americas and to do so for the long term.

Canadian officials call for a “dialogue” from both sides to find a peaceful solution in Venezuela. However, violence has escalated to a point never seen before. Members of the National Guard have opened fire, killed civilians, and arrested hundreds that were protesting peacefully on the streets. Canada must stand in solidarity with the people of Venezuela in their fight for a free and democratic Venezuela.

“Canada will not stand idly by as the shadow of an old tyranny looms over the innocent people of this great country,” Foreign Minister John Baird recently said about the situation in Ukraine.

In Latin America’s case, this is a great opportunity for Canada. As Prime Minister Stephen Harper once said, it is important “to strengthen and promote Canada’s foundational values of freedom, democracy, human rights and the rule of law.” It is so important to share the voice of freedom, democracy and human rights—no matter if it is a whisper or a yell. The calls to the world community for help must never be silenced. The words of truth and compassion must always be heard.

Make sure to watch and spread these videos around!