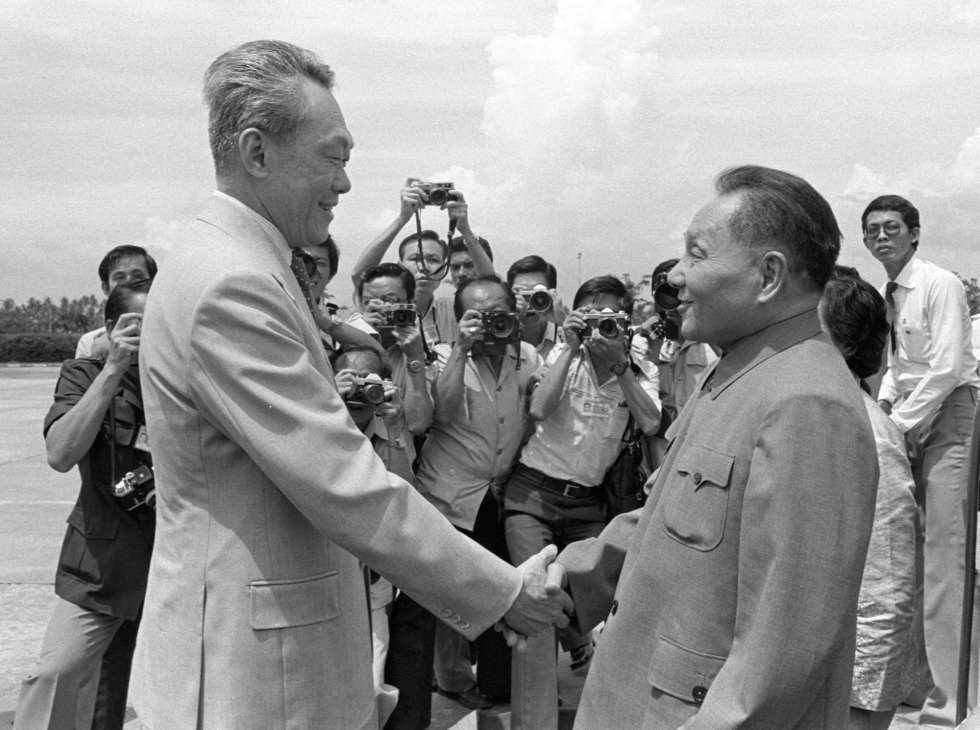 The excerpt below comes from the Election Rally Speech that the late Lee Kuan Yew gave in December of 1980 in which he talked about the failure of China’s Communist experiment under Mao Zedong and the fact that Deng Xiaoping decided to change course and move towards capitalism and openness to bringing in Foreign Direct Investors & MNCs:

“You got on the one hand, the Open Free Market System in America, you have on the other hand, the exact opposite, the closed, controlled, command economy of the Soviet Union, Communist Russia…

The Chinese tried the Communist model, with their own modifications, and it failed! And they have admitted that it failed, and they’re trying to pick up the same competitive spirit between workers, between different enterprises, which they noticed in Hong Kong, so they have opened a new town on the border with Hong Kong called “Shamchun” (Shenzhen in Cantonese) and they’re inducing Hong Kong entrepreneurs to go… and create employment!

Dr. Lee Siew-Choh and Mr. Jeyaratnam talk as if these things have never happened. They haven’t learned!

Deng Xiaoping is a great man… He fought a great revolution. He saw the product of that revolution turn sour. He was fortunate to live long enough and he had the courage to say “NO! WE CHANGE COURSE! LET’S LEARN! Let’s stop trying to do everything by ourselves.”

So they started importing and buying Boeing 707’s. So they bought Tridents instead of trying to manufacture their own aircraft. Eventually they will but it would take 2, maybe 3 generations.

That’s how we succeeded because we have open minds, common sense. A lot of analysis, careful weighing of the odds, make a firm decision, monitor it, implement it, modify as it goes wrong. ABANDON IF IT IS NO GOOD!

But often… And I say this more out of relief than out of pride… Often, 8 times out of 10 we have been right… We’ve made mistakes… We put money in New Port in Jurong… Second hand machinery… We were young then… We were new in the game…

They sold us second hand machinery, we didn’t know… We lost money… We wrote it off. But we learned…

Mr. Jeyaratnam says we are obsessed with profits. I said YES! That’s how Singapore survives!

We have no profit, who pays for all this?

You make profit into a dirty word, and Singapore dies.”

Deng Xiaoping learned this insight and verified this with observations on how nearby British-controlled Hong Kong prospered because of competitive Market Capitalism and openness to outside investors.

In 1979, Deng ordered engineering units of the People’s Liberation Army to cordon off a huge empty area near the border with Hong Kong with barbed wire, and start building roads and other infrastructure in order to create a new town. In the meantime, Deng started sending invitations to Hong Kong entrepreneurs to locate their factories in the soon to be built new town of Shenzhen where their costs would be a small fraction of their costs in overcrowded Hong Kong.

In 1980, Deng inaugurated the newly completed town of Shenzhen as a Special Economic Zone which became the blueprint for the rest of China’s shift towards competitive Market Capitalism. In order to appease his colleagues in the Communist Party of China, Deng Xiaoping labelled his competitive Market Capitalist system as “Socialism with Chinese Characteristics.” Deng changed China’s course away from Communism towards Capitalism starting in 1979…

(The video below explains how Lee Kuan Yew influenced Deng Xiaoping and how Singapore effectively served as the model and inspiration for China’s reforms and eventual economic rise.)

It’s now 2015, how come the Filipino Maoists and Communists still continue to push their outdated and discredited Maoist Communist ideology and their flawed idea of state-run protectionist “national industrialization?”

When will Filipino Communists ever learn? Are they really that stupid? Or are they nothing but useful allies of the evil & selfish Oligarchic Filipino Elites who also do not want foreign investors to come in and pose as competition to their protected monopolistic enterprises?

It’s time for everyone to learn from Lee Kuan Yew and Deng Xiaoping these two lessons:

Wake up from your slumber, Filipino Leftists!