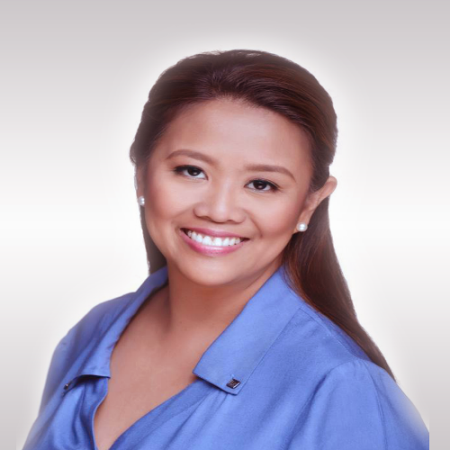 Nancy Binay is joining in the Senatorial Race because she can and because she has the necessary name-recall in order to win.

She’s joining the race because she has exactly what the current Philippine system of government favors in order to win a seat in the Senate: A well-known parent (Vice-President Jejomar Binay) and the right surname – Binay.

And that’s not her fault, honestly. It’s the system’s fault!

As the saying goes, “Don’t hate the player, hate the game!”

Think about it folks. We have a lousy presidential system with a Senate composed of 24 “nationally-elected” Senators of whom 12 are elected every 3 years for 6 years each…

Why do we not have a system where we divide the country into “autonomized” regions (in federalized fashion) and then have those regions elect their own respective senators to represent each of them?

See, folks, there is something fundamentally wrong with a system that forces voters to have to vote for 12 people at a single time.

There is actually no fight in this system between parties, and hence, there is no real talk about common platforms or party manifestos or party stands. This is a fight of individual candidates against other individual senatorial candidates even among those who are supposed to be from the same “slate.”

(This is in contrast to the  USA, for instance, where in each state, there is a battle between the Senatorial candidate of the Republicans for the state seat versus the Senatorial candidate of the Democrats for that same state and it becomes a contest between two parties representing different platforms. Australia has a similar concept of a Senate whose senators represent states.)

There is, in real Truth, no fight between Rissa Hontiveros versus Nancy Binay. The fight of Rissa is against other members of her own slate as well as members of the other team in order to get into the magic 12. In effect, Rissa and Nancy are competing against everyone else so that they get into the magic 12. It doesn’t matter which team, be it Team PNoy or UNA. Rissa is competing against 11 people from her “own team” (Team PNoy) and 12 people from the other main team (UNA), and whoever else are independents. Nancy is doing the same: competing against the rest of the UNA slate and against all the Team PNoy and independent candidates.

Take note that this particular race — the Senatorial Race — is one of the most name-recall and popularity-driven of all elections in the Philippines, even more so than the actual Presidential Elections. The thing about this is that the Senate Race was envisioned by those eminent fools who created the Philippine Senate to be a kind of “launchpad” for future would-be presidential aspirants. Those who win as Senators to get into the magic 12 will later be eligible to run as Presidential Candidates because they now have “nationwide” reach. That’s why this system is so rotten: it produces 12 new mini-presidents every election (24 in total at any given time, when including 12 incumbent senators whose terms are yet to expire in the next 3 years) who are not answerable to specific constituencies and instead think that the entire country is their constituency.

(Ever wonder why the Philippine Senate wastes  its time on issues like sex-scandals like the Hayden-Katrina sex-scandal or exposés like the old “Brunei Beauties” scandal? Well, that’s because they do not have specific constituents writing them letters, unlike in the USA where people from each of the states write their respective senators about problems specific to their own states.)

Case in point: a friend of mine who ran for councilor of a town in the Province of Rizal recounted to me how certain fellow candidates from the same party/team were removing his campaign posters because even if they were from the same party, they were actually competing against each other for limited slots.

So, ok, you select your 3 or 4 favorite senatorial candidates, and since you still have a remaining 8 or 9 more to go, you then think of who are the other candidates you remember in order to complete your list of 12 names. See? That’s name-recall!

In that situation, those who are easily remembered get their names selected on the ballot. And you’ll be more likely to choose just whomever it is you can remember as long as you don’t think he/she is “that bad.”

Get my drift, people?

That’s why so many clowns, idiots, and slackers end up as Senators. They’re winnable and have name-recall.

In this system, you don’t have to be the “first choice” of voters. You just have to be among those chosen on the most number of ballots. It doesn’t matter if you’re at number 8, 9, 10, 11, or 12 of everyone’s mind when they were chosing whom to vote for. As long as you’re selected on the ballots of so many people and get into the top 12, you’re in!

If you happen to appear on the most number of ballots, even if you are nobody’s First, Second, Third, or whatever choice, you will get top spot (the safest spot).

And guess why candidates running for the Senate aren’t really that “friendly with each other” even when they’re from the same “slate” (or party or team or coalition)? It’s because they’re all competing against each other! There are no parties in the Senate, folks. No real parties. Notice how senatorial candidates do not even have unified stands. They are, in essence, all independents! Each candidate stands for his/her own “platform.”

Observe, for instance, how the current Senate of the 15th Congress of the Philippines features members of the same party on opposite sides of the Senate! Take the Senate’s Nacionalista party members: Alan Peter and Pia Cayetano, and Sonny Trillanes are in the Minority, while Bongbong Marcos and Manny Villar are in the Majority. How is this possible? Look at the Senate’s Lakas-Kampi-CMD members:  Joker Arroyo is with the Minority, while the two actors Bong Revilla and Lito Lapid are with the Majority.

This is impossible in a true functioning system. Your membership in a party is supposed to determine whether you go minority or majority. In a Real System, if your party wins majority, then you’re in the majority and you’re expected to vote the way the majority would vote. If your party is in the minority, then you’re in the minority and that’s how you’re supposed to vote on most issues..

Well, the Senate is not about parties. It’s all about individual candidates who merely pretend to be members of parties, where all the parties merely act as a means of pooling resources together for shared electoral campaign advertising, printing, and campaign sortie costs. The electoral system’s lousy algorithm is what makes them act the way they act: parties mean nothing after the elections.

Told ya, folks! …Ours is a totally “effed-up” system!

So all those who think that Nancy should not be running ought to really think about it carefully.

Rather than oppose Nancy Binay’s running, you ought to campaign to get rid of this lousy system that allows Nancy Binay to win in a contest where all she needs is to say who her daddy is and remind the whole world what her surname is.

It’s time to shift to the Parliamentary System!

(Note: In a parliamentary system, the Government – aka “Majority” or “Administration” – must constantly debate against the Opposition in order to get their decisions accepted by the wider parliament. The Government must always fend off criticisms coming from the Opposition during Question time. Only competent people shine in a parliamentary system while incompetent and lazy slackers get relegated to the back-benches and often get weeded out due to the highly competitive nature of that system. The dynamics of debate and constant “on your toes” scrutiny does not exist in the Presidential System.)

We must scrap the current Senate system we have until we have a Region-based Federal system with Regionally-elected Senators who will make up a Senate that represents regional constituencies that, according to the way a Parliamentary System works, should be weaker than the lower-house!

(Note: A recent brouhaha occurred when there was a small group of readers who did not understand context of this article’s title. The title is taken straight from a popular American colloquial expression “Don’t hate the player, hate the game”, often rendered in the African-American style as “Don’t hate the playah, hate the game”, which actually simply means that “the person you are looking at as being bad is only bad because the system/environment makes him/her so.” Unfortunately, several people didn’t get that, and erroneously mistook this article to be “pro-Binay.” Totally wrong of them. This article basically goes deeper than symptoms. Nancy Binay is only a symptom of the real disease and that disease is our failed system. Fix the system and there will be no Nancy Binays or Kris Aquinos and other incompetent candidates running next time.