Junjun Binay acts like Vader: “Do you know who I am?”

What an abuse of power!

So Junjun Binay, Mayor of Makati makes a fuss about the rules that Dasmariñas Village has where certain gates are closed after a certain time.

If you all check this video (It’s long and has no sound, so you can just skim through it), you’ll see what happens when a four vehicle convoy carrying Mayor Junjun Binay and his sister Senator Nancy Binay are not allowed to pass by a gate that the Dasmariñas Village guards have already closed as it was past 10pm…

Watch the video and see how Junjun Binay is treated like royalty by one of his underlings. Somewhere at 2:50 in the video, an underling opens up an umbrella and held it up above the mayor despite it being evening (no bright sun requiring shade) and having no rain — a way of showing the guards that “this is royalty you’re dealing with.” 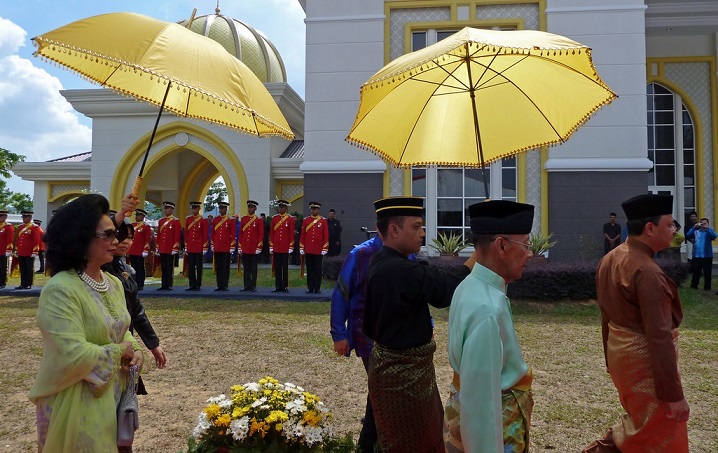 Malay Royals get the Royal Umbrella treatment.  Junjun Binay got this from his underling

According to the Philippine Daily Inquirer, a source who was privy to the incident said that at the point where Junjun Binay got out of his vehicle, he asked the guards “Don’t you know me?”

It sounds very much like a funny scenario described by British comedian Eddie Izzard in a fictional “Death Star Canteen” where Darth Vader orders for a Pene all’Arrabbiata and a canteen attendant says “You’ll need a tray“, and Darth Vader misinterprets it as insolence and says “DO YOU KNOW WHO I AM?”

You DEFINITELY need to watch this very very funny video:

This is the problem with systems based on Supremacy rather than Primacy among Equals.

In a Parliamentary System, the active executives do not enjoy this position of supremacy. A Prime Minister simply has a position of being First Among Equals within Parliament and thus must constantly prove himself to be better and more competent than everyone else in his team which is the basis of the respect and the primacy accorded to him. The moment he loses the confidence of his peers, he ceases to stay in that position of primacy and someone else takes over.

Whatever Supremacy there is would be accorded to the Ceremonial and fully Symbolic Head of State, either a ceremonial Monarch or a ceremonial President. But this supremacy is purely ceremonial. The ceremonial monarch or ceremonial president holds no real powers and as such merely exerts an essentially moral or ceremonial influence on the people, but has no true decision-making powers.

The same goes for the other positions in smaller local offices. Governors are supreme in their regions/provinces or states, but they do not exert real active executive power: Chief Ministers (sometimes referred to as Premiers in some countries) do. Chief Ministers are “mini-Prime Ministers” who are first among equals within state or regional assemblies (sub-national parliaments).

Alas, the Philippines continues to be in its Presidential Mess because if we are to be absolutely honest about it, Presidential Systems are really nothing but elected, time-bound semi-absolute monarchies. As such, leaders in these systems act like royalty.

A simple shift to the Parliamentary System will immediately change the dynamics of how the system works since the active executives do not enjoy the concept of Supremacy, which naturally gives those accorded it a sense of entitlement. Primacy — that of being “First Among Equals” (Primus Inter Pares) is different. It ensures that the active executives are leaders who derive their authority from their ability to inspire confidence in their competence, leadership abilities, and achievements among their peers. And this is evident with how Parliamentary Systems have Question Period for all members of the Cabinet, especially the Prime Minister (and other leaders). The fact that any Member of Parliament can question the Prime Minister shows how true the term “First Among Equals” is. Unlike a President in a Presidential System where there is no real official forum for ordinary people to directly grill the chief executive. Take note: In a Parliamentary System, this ability to question the leader goes for all levels. At the National Level, the Region/State level, and even city/municipal level.