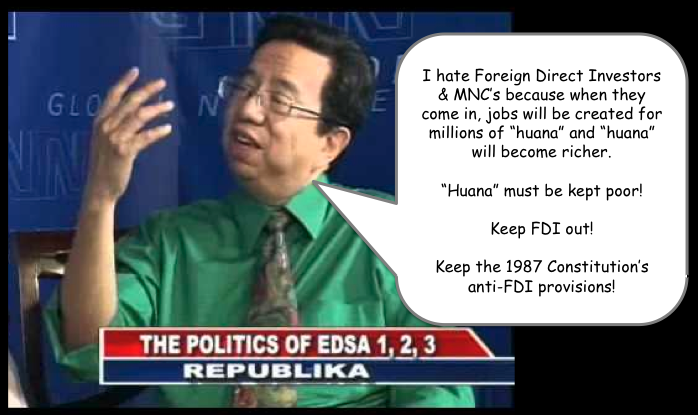 Last Friday, I read an article written by Herman Tiu-Laurel found in The Daily Tribune entitled “‘Opening-up’ RP“, in response to Peter Wallace’s column entitled “Constitutional Change Now” which was peppered with xenophobic racist rhetoric particularly aimed at Australians (as Peter Wallace is an Aussie), saying that he (Wallace) should return to the land of “bandits, rogues and garbage.”

I could not control myself but I had to respond to Herman Tiu Laurel’s utter garbage. I have to write this rebuttal in order to prevent others from being brainwashed or mislead by Herman Tiu Laurel.

He forgot to realize that as of July 2012, the Philippines only got $900 million foreign direct investment inflows compared with $800 million in July 2011, a growth of 10.6% but still one of the laggard in Asean compared to what Singapore got in July 2012 of $27.4 billion, slightly 1.9% below compared with the same period last year but is clearly still one of the prime destinations for foreign investments in the ASEAN region.

Let me show you the differences between the Philippines and Singapore in terms of openness to foreign investments according to the 2010 World Bank study, Investing Across Borders:

You see, the Philippines has more restrictions for foreign equity ownership because of the idiotic 60/40 forced equity sharing in favor of a Filipino individuals or corporations.

Singapore has the most relaxed foreign investment regimes according to the 2010 IAB study by the World Bank.

He writes that the country already has significant surplus in foreign exchange holdings relative to its foreign debt, and P1.8 trillion in savings from Overseas Filipino Workers, export and BPO sectors held in the Bangko Sentral ng Pilipinas (BSP) paying four percent to keep in its vaults. While I do agree that we do have a significant surplus in foreign exchange holdings, Herman Tiu Laurel does not seem to realize that such money is not meant to be spent by our government on social & infrastructure spending as well as many others but instead, the bulk of Foreign Exchange reserves held by the Bangko Sentral ng Pilipinas are supposed to be used to cushion & stabilize our exchange rate relative to other world currencies from the fluctuations of the global economy, therefore our foreign exchange holdings are meant for the protection of our currency.

He says that we have P1.8 trillion savings from Overseas Filipino Workers but I tell you, Herman, what’s the use of those trillions of pesos of remittances from our OFW’s when only 15% is meant for investment that would have provide jobs for other Filipinos at home while the other 85% all goes straight to consumption whether for necessities or frivolous spending, you simply cannot grasp the spending attitudes of most OFWs who went abroad forcibly just to support their families whom they’ve left behind here in our country while causing other social problems like adultery/marital infidelity, break-up of families, juvenile delinquency, drug addiction, teenage pregnancy, and among others.

Here you are, encouraging more Filipinos to go out of our country while not fixing our investment climate so that instead of Filipino workers going abroad, the foreign investors should be the ones who will come here to our country to provide jobs to millions of unemployed Filipinos, provide technical expertise training to Filipino workers, provide technological guidance to Filipino entrepreneurs (particularly those who are suppliers to the MNC’s), and many others. The goal in luring more investors is to provide them with a better and much friendlier environment so that they will choose to invest here in our country, instead of driving them out of our country through ill-conceived foreign equity ownership restrictions found in the Constitution.

(Webmaster’s note: Incidentally, many Filipino-Chinese businessmen, such as Taipan John Gokongwei, and the Federation of Filipino-Chinese Chambers of Commerce and Industry, Inc. and many others are pro-Constitutional Reform and actively favor the removal of Constitutional Restrictions against FDI and MNC’s. These patriotic Filipinos of Chinese descent agree that the entry of FDI creates jobs and helps Filipinos improve their lives. It is racist scum like Herman Tiu Laurel who prefer to keep Filipinos poor and forced to go abroad as OFW’s, abused and exploited and far away from their families & loved ones.)

Tiu Laurel keeps saying that the money from the Forex reserves, our OFWs remittances, exports, and BPO revenues should be used for productive agriculture and manufacturing enterprises which would necessarily compete and substitute for goods imported today — local dairy, shoes, clothes, steel, machinery and others. He does not realize that the money the government gained from taxation is not enough for spending on agriculture or manufacturing. As such, the government cannot fulfill those tasks compared with the private sector in running enterprises as the government has to rely on appropriations rather than on profit in targeting the market’sneeds or allocating money for improving services.

(Quite obviously, the racist Herman Tiu Laurel is out-of-touch with reality as other countries that are rapidly growing and fast eradicating poverty are the countries who are extremely aggressive in attracting Foreign Direct Investments and MNC’s precisely because they have been relaxing their restrictions against FDI. For them, bringing in FDI & MNC’s are a way to rapidly create jobs for their people. Herman Tiu Laurel wants Filipinos to remain poor and miserable.)

Without real foreign competition in the domestic market as a result of the restrictive investment regime stipulated in our 1987 Constitution, there is no motivation from locally-owned enterprises to expand their market or improve their products and services to consumers or improve conditions (and wages) for their workers. Herman Tiu Laurel’s argument that we have no shortage of local capital is dead wrong. Worse, the vast majority of the Filipino people do not even have enough purchasing power to spend beyond their basic needs.

In order to get our economy generating more inclusive economic growth, we need to encourage foreign capital, technology, and expertise to enter our country without much restrictions and with proper regulations so that if there will be more competing companies for jobs in order for their businesses to operate, more unemployed Filipinos will be given an opportunity for employment at home instead of forcing them abroad. As more jobs are created, companies are forced to compete against each other in order to attract jobseekers, which tends to increase wages over time. This happens because ultimately, with increased competition,  companies will want to maintain their current crop of workers and dissuade them from transferring to other competing companies through better wages, benefits, and better working conditions. Higher wages over time means that there will be an increase in  purchasing power among workers to spend for their basic necessities as well as their own leisure, or for establishing small enterprises that may later compete with existing enterprise, thus benefitting both consumers and workers.

The power of the free flow of capital, technology, and expertise are what Herman Tiu-Laurel cannot or maybe will not bother to grasp as he defends the interests of his bosses who are afraid of foreign competition that could potentially diminish his uncompetitive bosses’ profit margins, and therefore undermine his own financial survival. On the other hand, with the entry of more and more FDI and MNC’s, the ordinary Filipino People are the real winners as they – the ordinary people who make up the bulk of the population – would be empowered as both consumers and employees with more competition in the economy. Who cares if the players are local or foreign? It’s Job Creation for Filipinos that really matters!

Herman, you should eat your own words.

A simple Filipino libertarian who aims for political and economic reforms for the Philippines.