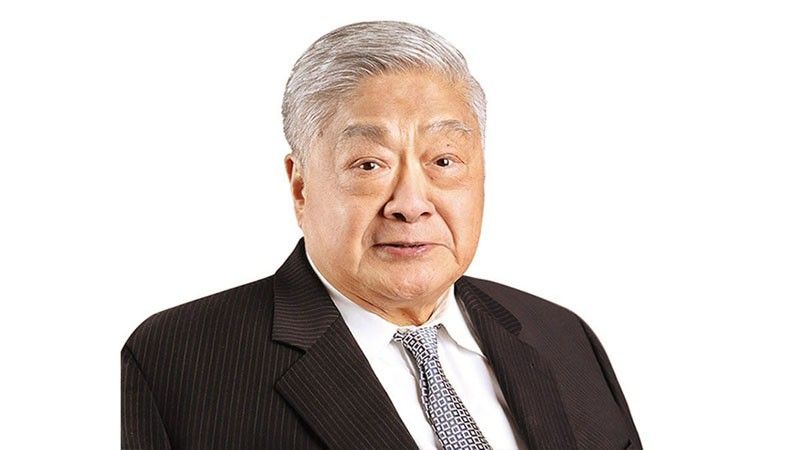 by Ducky Paredes (article from August of 2006)

Mr. John, as his corporate family fondly refers to John Gokongwei, has always been known for being a practical businessman. He is not taken to flights of fancy; instead, every thought is mired on what is doable and practical. Each time he talks to graduating classes or students, John Gokongwei has always talked practical good sense.

Mr. John started with very little, was on the verge of poverty when he was staring out and, years later, finally through sheer hard work, – made himself into a Filipino and Asian taipan by growing his companies into the giants that they now are.

Recently, John Gokongwei retired from active management and passed on all of his companies to his siblings and his children. This, he says, will give him more time to think, read and enjoy the rest of his life, after having lived and worked for 80 long and hard years.

1. Let us change our system of government;

2. Let us open up our economy to foreign investors.

This, he feels, is the best way for us to catch up with our more affluent Asian neighbors, all of whom, by the way, have parliamentary systems of government.

“Charter change is a good thing. You can change the top leaders without a revolution.”

Yes, that would be a blessing and, perhaps, we would also finally forget People Power, which, no matter how one looks at it, cannot be a democratic institution since it has to be in violation of whatever system of government we may have – whether presidential or parliamentary. Of course, as Gokongwei points out, in a parliamentary system, there is really no need for People Power or revolution since we would be able to change our head of government by a simple majority vote of parliament.

Mr. John points out that the parliamentary system in Thailand, Malaysia, Singapore and Japan is working well, thank you. In contrast, “I think we’re the only country that followed the American system,” said Gokongwei.

How did we take to the presidential system? We did as the Americans whom we then called our “Great White Father” did. “It’s like what President Bush has been saying about bringing democracy to Iraq. But what’s happening there is much worse than before he came in. The Americans just don’t learn their lesson,” said Gokongwei.

Instead of the American model, we ought to find our role model from Asia. To Mr. John, what would be best as our models are probably Taiwan or China:

“If we had only done what Taiwan did 40 years ago and what China did 20 years ago, we could have done it in 1945. Now, it looks like it’s too late, but there is still time.

“We did not develop any industry beyond Coca-Cola. We had some textiles and shoes and they were completely obliterated. How many business people put in their money in an industry? Can you name five? None, you can’t even name one. In real estate you can name 10. That’s my point.”

According to Mr. John, we missed our chance to develop our economy. We were ahead or at par with our neighbors 60 years ago but now, our Southeast Asian neighbors have left us very far behind.

“Everybody else is passing us by; that is what worries me.”

More than changing the political landscape, John Gokongwei was excited about thinking that the time has come to also lift foreign equity restrictions in the economy. This was the same conclusion reached by a full-blown commission that studied possible amendments to the Constitution during the time of President Joseph Estrada. For us to progress, the greatest need is investors. Without investors, how do we create the industries that would employ Filipinos so that they will not have to go abroad to have a job?

“It’s hard to open up the economy without amending the Constitution. I agree that mining and real estate should be opened to everybody because you need foreign capital to help any country develop its economy. Look at China, it is getting a lot of direct foreign investments,” Gokongwei said.

Although foreign ownership of land and resources can be an emotional jingoist argument against foreign investors, in reality an investor cannot cart his investments out of the country.

John Gokongwei’s own company JG Summit Holdings, is investing heavily in industry and betting on local industries to make the Philippines a tiger economy.

Mr. John is smart enough not to judge our past presidents or make too many comments on them but he does have a good word for one of the most maligned of our presidents:

“(Elpidio) Quirino had the right economic policies at the time when he put up the dams like Ambuklao and pushed for the country’s industrialization. His policies were good; he was the first to see the country’s need to build up its own power because we don’t have enough money for oil.

“Up to now, we’re always short of power and he already knew that back then in 1947. Unfortunately, (Quirino) had this problem about the P5,000 golden chamber pot. I’m not saying he was the best president, I’m just saying I liked his policies.”

Who should run this country?

“I don’t know. I think it should be run by a good man, intelligent, willing to take risks. You have to know your resources and use them.”