No Parliamentary System, No LKY & No Mahathir 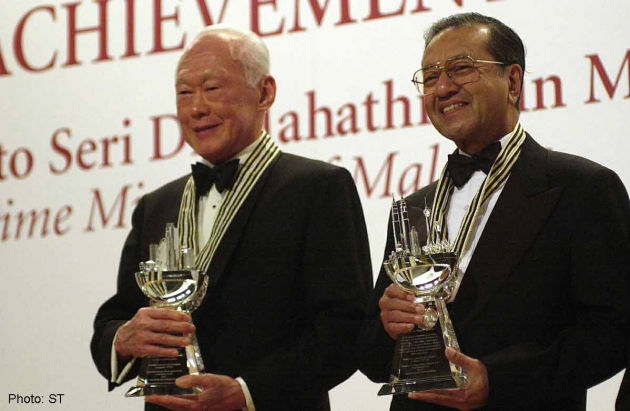 This old article from 27 April 2006 by Alex Magno emphasizes that Mahathir bin Mohamad of Malaysia and the late Lee Kuan Yew of Singapore could only emerge from the electoral mechanisms of a Parliamentary System and succeed in transforming their respective countries into the economic powerhouses that both are within the world (Singapore) and within the region (Malaysia) because of the operational features and improved efficiency of said system. Under the Philippine Presidential System the two giants would either never have won – due to their straight-talking abrasively honest style of speaking which would not allow them to win in the popularity-centric system of the Presidential System – or had they won, they would not have succeeded in transforming their societies for the better.

No wonder the Philippines continues to be such a “hopeless” basketcase. We have a system that does not allow such intellectual giants and tireless reformers such as Mahathir bin Mohamad of Malaysia as well as the late Lee Kuan Yew of Singapore to win. Ours is a flawed system that easily allows famous actors, celebrities, and sons-and-daughters of famous people who are not chosen based on competence to win. Had Malaysia and Singapore had the exact same flawed, problematic, and fouled up presidential system that the Philippines currently has, quite obviously, both societies would have ended up becoming miserably pathetic failures just like the Philippines.

Our neighbors in the region are closely scrutinizing the crazy twists and turns of our politics – sometimes with awe and not always with admiration.

We sometimes forget we live in a fishbowl, with all the world watching the odd things we do. The most parochial among us think we have the sea to ourselves, a sea whose murky waters escape the scrutiny of our friends.

One keen observer of the sometimes bizarre conduct of our national affairs is former Malaysian prime minister Mahathir Mohamad.

Although retired from government, Mahathir keeps tabs with unfolding events in the region. Revered by his countrymen for the great economic achievements of his period of rule, he keeps office at the penthouse of the Petronas Towers, the highest edifice in the region and probably the world. From there, he observes his bustling capital and contemplates regional developments.

Last week, House Speaker Jose de Venecia called on Mahathir in the course of a five-day visit to Malaysia, swinging across from Kuala Lumpur, Sarawak and Sabah. The visit was primarily intended to conduct consultations with Malaysian foreign minister Syed Hamid Albar on the future of the envisioned ASEAN Community and on de Venecia’s proposal to create an ASEAN Parliamentary Council.

Always forthright in his views, Mahathir was not shy about his opinions on the Philippines, even as he qualified those views with a polite disclaimer about non-interference in our internal affairs.

He bluntly told de Venecia that the “Filipino people need a break.”

In the context of their conversation, that “break” is understood as a respite from the hyper-politicking that has plagued our country of late. That hyper-politicking has gotten in the way of our efforts to improve our economy, raise productivity and build a better future for our people.

Hyper-politicking has produced gridlock, endless bickering and neglect of urgent policy actions. It has undermined investor confidence in our economy and prevented willful leadership from being exercised – the same sort of leadership that Mahathir himself deployed in bringing Malaysia up from backwater economy status to that of an “Asian tiger.”

Mahathir agreed with de Venecia that a parliamentary system of government could work better in the Philippines because it ensures “continuity in policy and the faster pace of approvals of development programs.”

A major factor explaining Malaysia’s success story under Mahathir’s leadership is a responsive government enabled by the fusion of legislative and executive powers in a parliamentary system of government. The dominant role played by the major party UMNO ensured continuity of policy perspectives independent of the fates of individual power-wielders.

When Mahathir retired from politics, there was no uncertainty about the policy architecture that brought Malaysia to tiger-economy status. That policy architecture is not a personal legacy of Mahathir. It is the fighting faith of his party, UMNO, which continues to command the support of the Malaysian people.

If Malaysia had a presidential system of government, Mahathir might have never become its leader. Tough-talking, brutally frank and often abrasive, this man could not win a popularity contest.

Even if, hypothetically, Mahathir was elected president of a Malaysia under a presidential system, the man might not have accomplished what he did in a parliamentary setting. The legislature would have obstructed his most dramatic innovations. His team might have spent precious time and energy attending endless congressional investigations. Other aspirants to the top-post might have constantly conspired to cause his failure or smear him in the public eye as a means to undercut his base of public support.

The phenomenon of a Mahathir and/or a Lee Kuan Yew, for that matter, would be difficult to imagine outside the framework of a parliamentary system of government. That system of government encouraged the full development of political parties that, in turn, built public support for innovative policies. The parliamentary form, along with the strong party system it fosters, ensure the cultivation of an ample supply of prospective leaders ready to take over and provide a consistent and reliable quality of leadership.

It is, likewise, a process that requires the reliable institutionalization of political commitment to a strategy for progress. A national project of achieving a modern economy is, after all, a task that is too large even for the greatest of leaders to undertake singularly. It is a task that requires the sustained effort that only a committed party can ensure.

Without diminishing the personal qualities of great Asian leaders such as Mahathir or Lee Kuan Yew, it remains that their feats of statesmanship could not have been done without the strong network that only a stable political party could provide. The parliamentary form of government ensures superior conditions for evolving that stable network.

When Lee Kuan Yew, and later, Mahathir Mohamad, reached the point when it was best to withdraw from their leadership roles, the transition was never traumatic. The process was never uncertain. The continuity of the policy architecture was never in doubt.

When Mahathir endorses the parliamentary form for us, he is not offering an opinion from the ivory tower. He is speaking from the vantage point of a successful leadership episode. He is speaking with the richness of experience of what this form of government has made possible for him to accomplish despite the adversities his people had to face.

Great leaders do not fall from the heavens and perform overnight miracles of national development without a stable governmental platform.

At the risk of sounding tautological: great leaders can only emerge from political and institutional conditions that make great leadership possible. The most important characteristic of those conditions is that they do not rely on the mysticism of leadership and do not fall prey to the destructive tide of personal ambitions as well as personal jealousies – both of which are in abundance in our politics today.”