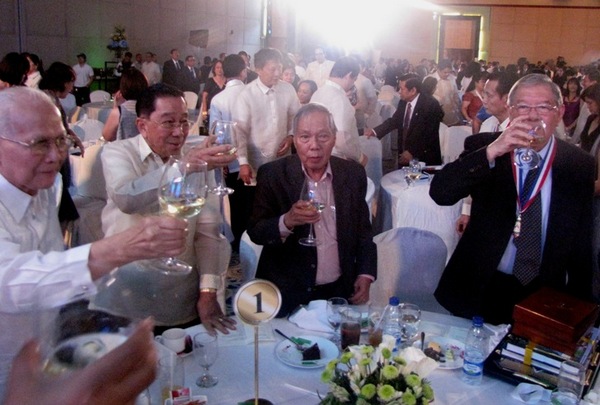 After reading the article written by Neal Cruz last October 17, 2011  titled “Cha-cha will let foreigners grab our lands”, I couldn’t help but have the urge to reply to some of the claims made by Mr. Cruz on the aforementioned article.  Had not he been so serious about the claims he had made, I could have easily dismissed it but with the amount of vitriol he likes to throw against the “evils of foreigners” and other assorted nationalist rah rah, I felt I really needed to write this as a response.

In his article, he writes that the proposed ChaCha or Charter Change, which aims to amend provisions of the current 60/40 ownership restrictions placed on foreign investors, will allow foreigners to “grab land from the Filipinos.” Despite not having anything to back this statement up, for him it is a fact simply because it stirs nationalism in the hearts and minds of Filipinos against the much-dreaded “evil white man” and when most of the populace has to deal with the harsh realities of life, nothing is more comforting than the nationalistic wails of “Pinoy Pride” or “the Philippines belongs to Filipinos only.”

Let me explain why his statement of foreigners “grabbing” all the lands here is both dubious and ridiculous. Vietnam and China, both countries who have really large foreign investments, allow foreigners to fully own 100% of any company set up in these countries. Section 8 of Article 2 on the 1996 Law of Foreign Investment in Vietnam states that a foreign investor is defined as “An enterprise with one hundred (100) per cent foreign owned capital means an enterprise in Vietnam the capital of which is one hundred (100) per cent invested by foreign investor(s).” Clearly this states that any foreign company who wants to invest in Vietnam can invest with 100% foreign ownership. As per land ownership, Section 1 of Article 5 of the Vietnamese Law on Land states that “Land belongs to the entire people with the State as the representative owner” meaning that land ownership lies in the hands of the State, which then leases the land (or sells time-bound “land-use rights”) to foreign investors. That’s because the two countries aforementioned follow the principles of Georgism, which states that anything that is not created by man, in this case the earth, cannot be owned.  No evil white man grabbing land there.

Skyline of Hanoi, capital of Vietnam

Although his claim that marginalized local folks will “run out of land” if we allow the “evil white man” to own lands in the Philippines due to the country’s small size and ever-increasing population sounds academic to some, it is false since there are other countries that are smaller with lesser land area that allow foreign ownership of lands yet their citizens are neither “marginalized” nor “evicted” from their lands to pave way to foreign ownership. Singapore, which is a lot smaller compared to the entire island of Luzon (Singapore, with a total land area of 778 km2, is even smaller than Marinduque, which has a land area of around 963 km2), allows foreigners to own land under the 1973 Residential Property Act which states that “The Act seeks to strike a balance between giving Singaporeans a stake in the country by being able to buy and own residential properties at affordable prices, while attracting foreign talent by allowing permanent residents, foreign companies and limited liability partnerships that make an economic contribution to Singapore to purchase such properties for their occupation.” Yet you never hear of any “oppressed” or “marginalized” Singaporeans who cannot own land. Seems like there is something so special about the Philippines that makes “evil white men” want to grab all the land.

Adding more fuel to his “Pinoy Pride” ultra-nationalism is his statement about “European settlers grabbing the lands of Amerindians and confining them to reservations”, as nothing is more dreadful than instilling the thought that evil foreigners are out to get your land and have their way with the local women, despite being historically inaccurate. When the first batch of Europeans arrived in 1492, this vast land now known as America was not owned by the Amerindians as a nation as there was no “Amerindian or Cherokee” nation that existed during the time, despite claims made by these sponsors of White guilt. The land was inhabited by several Indian nations such as the Cherokee, Iroquois, Apache, Mohawk and others who among themselves fought for land ownership. Historical facts be damned in the name of “Pinoy Pride.” 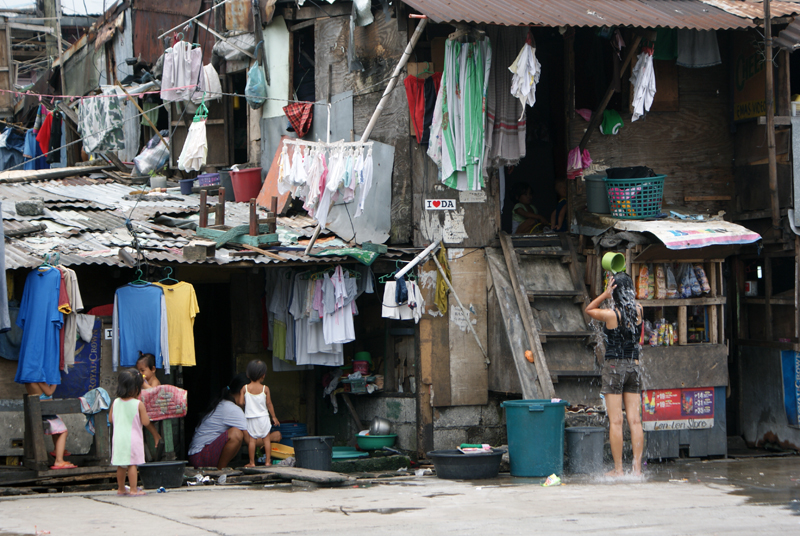 This is the result of very little investment (foreign or local), resulting in very few jobs…

And his claim that the 40% limit of foreign ownership of companies and utilities here in the Philippines is for the “benefit” of the Filipino people is ludicrous as the results has proven to be detrimental to the Filipino people. Looking at utilities alone, the Philippines ranks as having the highest power rates in Asia, and among the highest power rates in the world. Why? Because power generation is monopolized by the state-owned NAPOCOR , which then provides little or no competition to other foreign/local energy generation firms which then gives little incentive for NAPOCOR to generate electricity at lower prices through the use of less fossil fuel/coal dependent means such as geothermal and hydroelectric power as they do not have to compete in the consumer market with lower power rates and value-added services, which is the very essence of competing companies in free markets. This in turn allows them to sell electricity at fixed rates to various electric providers, who in turn have the liberty of overcharging for their services as there is no one else competing with them. As a result, many Filipinos have to suffer as foreign investors are hesitant to set shop in the Philippines due to the high energy costs which in turn keeps most of the population jobless and local businesses too have to struggle with the high power costs to keep themselves operational and the regular Juan Dela Cruz has to endure paying high electric bills.

Another example is the Internet. According to SpeedTests.net, the Philippines ranks 121st in terms of internet speed (Average download speed/download rate) at 787 kbps (0.8 mbps) or 98 KB/sec, lower than its Southeast Asian neighbors(Malaysia at 1269kbps or 159kb/sec, Singapore at 4078kbps or 510kb/sec, Thailand at 3529 kbps or 441kb/sec) Want to know why? Since foreign investors have limited ownership and because foreign ISP’s cannot invest in the Philippine market, which also allows them to invest in the technology for high-speed internet, the populace is left with a few major internet providers who are free to jack up internet prices or provide cheap internet but with terrible service as these companies have no competition in the local market. I don’t think the average Filipino wants to pay higher electricity or live with mediocre internet connection all in the name of “Pinoy Pride.”

His third to the last statement made about Petron’s sale to ARAMCO smacks of his ignorance on the free market system. Free markets work through the basic law of supply and demand, which states that when the demand is low and the supply is high, prices are low and vice versa. By allowing the government to intervene, which is what he wants through price controls, this creates an artificial demand as lowering prices for the sake of the “poor” masa only allows for more demand, and when supply can’t keep up, you eventually run out of supply, the end result being long bread lines, just like in communist countries such as the USSR in the late 1980’s.

It is true and sad that most Filipinos cannot afford the means to buy housing and their own land, coupled with the skyrocketing costs of commodities and other necessities. But the solution does not lie in big government, corporate monopolies and autarky. By keeping out foreign investors and kicking them out, which at the end of the day is what Mr. Cruz wants, it will only worsen the plague as there will be no new jobs generated and we’ll end up with high costs of products & services and more poverty. Without a lot of lucrative job opportunities for local employees, it destroys both the ability of the local economy to grow through the multiplier effect and social mobility, meaning the ability of those who want to move up the financial food chain to do so, thus leaving us no choice but having to rely on our overseas workers for their dollars.

Looking at our more successful neighbors like Singapore, one of their formulas for success is by allowing foreign investors to invest in the country with 100% ownership and removing the protectionist and ultranationalist policies that were in place. As a result, Singapore is among the wealthiest nations in Asia and has truly gone “From Third World to First” alluding to the title of Lee Kuan Yew’s book on Singapore’s success. As the late Paramount Leader of China, Deng Xiaoping once said: “It doesn’t matter if it’s a black cat or a white cat, if it catches mice, that’s a good cat.”

In the age of globalization and advancing technologies, where whole economies are intertwined by free trade and the world is made even smaller by the internet through e-commerce, there is simply no room for such ultranationalistic backwardness. But unfortunately, many of the likes of Mr. Cruz will still push for over protectionist policies and kick out people who will bring further wealth to the country all in the name of “Pinoy Pride” or “Brown Power.

Too bad it neither puts food on the table nor buys the clothes on your back. 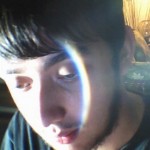 About the Author: James Aron Mangun, known simply as James or “Jim” to colleagues, is a former BPO English Trainer in several companies and now a freelance BPO consultant/businessman who regularly visits political Philippine blogs and websites to offer his two cents on current events/affairs.

He is an ardent believer of the free market system and is an avid fan of Ludwig von Mises, Ayn Rand, and Milton Friedman. He currently runs the Mangun On Markets website with his father John where they offer advice/tips to people interested in investing in the PSE. You can visit his site at http://www.mangunonmarkets.com