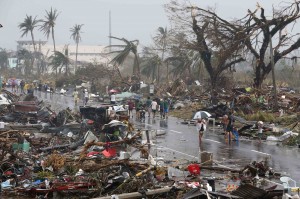 Residents walk on a road littered with debris after Super Typhoon Haiyan battered Tacloban city in central Philippines November 10, 2013. Haiyan, one of the most powerful storms ever recorded, killed at least 10,000 people in the central Philippines province of Leyte, a senior police official said on Sunday, with coastal towns and the regional capital devastated by huge waves. Super typhoon Haiyan destroyed about 70 to 80 percent of the area in its path as it tore through the province on Friday, said chief superintendent Elmer Soria, a regional police director. REUTERS/Erik De Castro (PHILIPPINES – Tags: DISASTER ENVIRONMENT TPX IMAGES OF THE DAY)